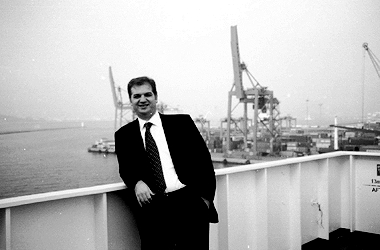 Levent Sarioglu was born on 5 January 1964 at Istanbul.

He graduated from Hasan Ali Yucel Elementary School at Etiler in 1975 and from Besiktas Ataturk High School in 1981.

He continued Maritime education in Merchant Marine Academy at Istanbul and graduated on 1985.

Military service has been completed by him in 1986 with short term period and he continued to work in Turkish Cargo Lines tonnages.

After marriage he decided to work at shore and started Chartering career in January 1991 for B.Sohtorik Shipping as Broker. Levent worked there during two years for controlled tonnages of company for Chartering and Vessel Operation duties.

He joined Navitrans Agency Services Inc. on 18 January 1993 as Broker for the recent establishment of Chartering Department. In the middle of 1993 with own efforts and organization of Levent, Company started to do Ship Management for 4X 6.000 dwt general cargo vessels belong to Admiral Makharov Maritime Academy at St.Petersburg Russia. Up to 1995 these vessels were operated by company in the region of Baltic Sea, North Europe, Mediterranean and Black Sea.

During 1996-1998 with again personal effort and organization of Captain Levent Sarioglu, company got management of 8 Russian vessels belong to Markont JSC St.Petersburg. Five vessels were Baltisky type Sea/River tonnage and three general cargo vessels. These vessels were operated by company again in the region of Baltic Sea, North Europe, Mediterranean and Black Sea. With increasing age of Markont fleet, Ship owner decided to sell vessels for demolition and with remained one vessel operated by him until year 2000.

During BULCON agency as from 1995 till 1998, he worked Director for Chartering and Container Trades position. In mid 1998 he become General Manager Position and carry BULCON name and activity up with offices at İstanbul and İzmir, 5 Container stackers at Port/Container depots and 46 Trucks for container haulage with 150 staff. He worked a lot with his team with restricted condition of Bulcon and competed with worldwide mega carriers in Turkey. Bulcon will be carried by company one of the important player position in Turkish market for UK, North Europe, West Europe, East Med and Black Sea regions.

After privatization of Navibulgar in August 2008 while new management intended to close Bulcon, Capt.Levent Sarioglu took an important role for restructuring of Bulcon organization on 9 October 2008 as CEO of Bulcon and Navibulgar offices at London, Hamburg, Antwerp and Piraeus. Regret but before official set up, new owners of Navibulgar decided to close Bulcon on 18 December 2008 due to hard condition of Global Economic Crises in World while half of their Dry Bulk Fleet (30 vessels) were laid up.

After closure of Bulcon due to working condition difficulties Balkan and Black Sea Denizcilik Turkey compelled to give redundancy of staff start in March 2009 with 100 staff. Due to completed mission, he left in 2nd half of 2009 after 17 years worked for company.